Using the keyboard with the Oculus Rift

Sometimes we just need to type text on the keyboard.

The Oculus Rift makes this challenging.  Showing the UI and letting the player see the text they're typing isn't the problem.  It's much simpler to describe, and much harder to deal with.

The player can't see the keys.

Even if they're a great touch-typist, just finding the keyboard on your desk and reaching the home position can be problematic.

It's not ideal, but the solution I've come up with is to ask the player to take off the Rift while they're typing.  I'm lucky enough that the only thing I need them to type is an online log-in which I can ask for as soon as the game is launched.  This means they're not taking it off and putting it on through out the experience and since they weren't using the rift to operate windows before launching the app they'll get in the habit of not donning it until they're signed in.

Here's a screenshot of how I'm doing this on SnowDrift... 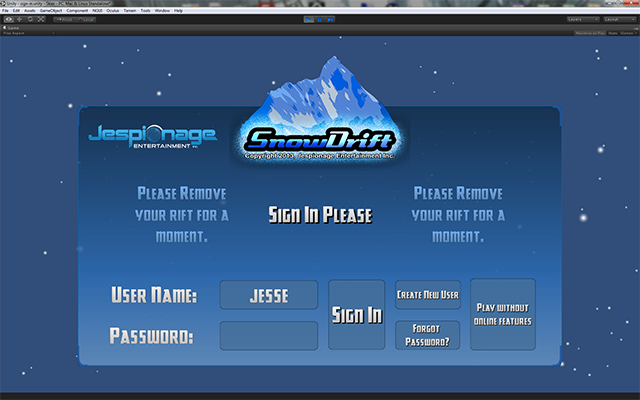 This isn't final, but you can see the important bits.  It's a busy screen, with typing that requires the user to take off their rift.  If they were wearing the Rift unit when they got to this screen, almost everything you see here would only appear in one of their eyes, and they would be unable to comprehend it clearly.  The only thing that would be clearly visible to them would be the light blue message to take off the rift since it's displayed in stereo at a comfortable focal distance.

As we grope our way through the first few months and years of real VR, I hope we come up with a better solution than this, but for now I hope someone finds this discussion handy.
Posted by Unknown at 09:10